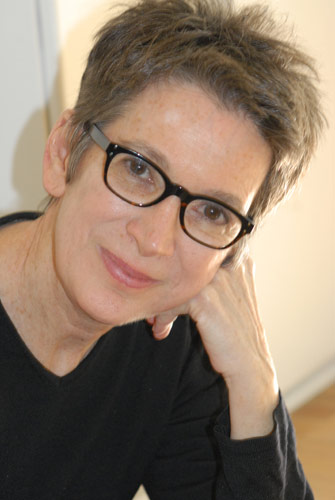 Kay Rosen’s investigation into the visual possibilities of language has been her primary focus since 1968, when she traded in the academic study of languages for the study of language- based art. Through paintings, drawings, murals, prints, collages, and videos, Rosen has sought to generate new meaning from everyday words and phrases by substituting scale, color, materials, composition, graphic design, and typography for the printed page.

While political issues often form the bedrock of Rosen’s artwork, she insists that her work is driven not by politics, but by language, and she follows it to whatever place it takes her. Rosen loves the physical act of drawing and painting, and materially her paintings and drawings are intensively rendered; however, she considers language to be found material, conceptually placing her in the more passive role of a cognitive observer and enabler of language. The writer Rhonda Lieberman described her as a revealer of language who “shows it doing things that are totally above, beyond, and/or below its function as a mode of communication.”

Rosen’s work has been described as sculpture, poetry, architecture, and performance. Roberta Smith once called her a “writer’s sculptor” and Eileen Myles called her the “poet of the art world.” In a 2014 piece for Art In America, Rosen wrote: “The linguist in me wanted meaning to be carried by the structure of the words, not type style; the inner painter insisted that color convey meaning; the sculptor in me obsessed about the construction of letterforms through materials and process; and any poetic instincts strove for efficiency.”

Kay Rosen has been the subject of numerous articles, reviews, and group and solo exhibitions, including in 1998 a two-venue mid-career survey entitled Kay Rosen: Li[f]eli[k]e, curated by Connie Butler and Terry R. Myers at the Los Angeles Museum of Contemporary Art and Otis College of Art Design. She has been the recipient of awards that include a Guggenheim Foundation Fellowship in 2017 and three National Endowment for the Arts Visual Arts Grants. Her work is included in many institutional and private collections. Rosen taught at The School of the Art Institute of Chicago for twenty-four years. She was born and raised in Corpus Christi, Texas in 1943 and lives in New York City and Gary, Indiana.

“I-71,” Billboard project, in collaboration with the Contemporary Art Center, Cincinnati, Ohio (October-November, 2016), curated by Anne Thompson and Steven Matijco, installed on I-71 East at Smith Road September and at three other locations October 16 through November 6
“Strange Oscillations and Vibrations of Sympathy,” University Galleries of Illinois State University, Normal, Illinois, curated by Kendra Paitz

“I Was a Double,” Tang Museum at Skidmore College, Saratoga Springs, New York, curated by Ian Berry and David Lang
“The I-70 Sign Show,” Highway I-70 near Columbia, Missouri, curated by Anne Thompson

“All Over the Place,” Moming Dance Center, Chicago, IL, curated by Eileen Shukofsky

Return to top of page